Brazoria County Sheriff Deputy Jason Anderson is seen here, texting me under false pretense. I have never met anyone named Jason Anderson who works for the Brazoria County Sheriff. Deputy Anderson claims he met me while I was riding my bike, but at the time he started texting me, my bike had been stolen 2 months prior. I never once gave any person my cell phone number while riding my bike. How did Deputy Anderson know that I would frequently ride my bike? How did he know I was single, or anything about me at all? He reveals in the following texts, that he got my number from the 911 call center I phoned, and that he was the responder who took my frantic call when my ex- husband Mike Phillips Jr., ran over my front gate, broke down my front door with a baseball bat, then trashed my property once inside, and then threatened my life.

The Brazoria County Sheriff Department responded to my call, however I experienced the same typical response, once they finally arrived at my house. The deputy was rude and condescending, and I was so upset that my hands would not stop shaking. “Isn’t it illegal for someone to force their way in, destroy property, and then threaten your life?”, I asked?

The deputy looked around at my furniture knocked around everywhere and at my busted down door, and then looked back at me and said “Not a whole lot we can do mam, seeing there were no witnesses. It would be his word against yours”, and then Brazoria County Sheriff Department left without taking a statement from me.

The following images are screenshots taken of my conversations with Deputy Jason Anderson. I have never met this deputy, nor did I give him or any other staff member of the Brazoria County Sheriff Department permission to text my cell phone, for any reason, especially not one of a personal nature. I have never met this Deputy Jason Anderson, but he boldly reveals in these texts,that he definitely had preconceived notions of who I was, and felt no apprehension at all in texting me with a false pretense, which was extremely inappropriate, and he admittedly was doing this while on duty.

At the time, I was so desperate for law enforcement to take me seriously. And at this point in time when Deputy Anderson started texting me, I had already suffered a long hard year all alone in the country. Deputy Jason Anderson texting me was obviously part of a game being played at my expense. Later, I would realize how common this sort of misconduct is with law enforcement. It’s one of the truly evil and twisted elements in the world of gang stalking.

They knew I would text Anderson back, given the vulnerable situation I was in, and being so frightened and desperate for help.

My father suddenly died, neighbors became cruel and I did not understand why. I experienced constant vandalism on my property. My jeep completely stopped running, my water well was stolen, my house was broken into constantly. And it seemed as if the world thought I died too, along with my Dad. I had no transportation to find work, neighbors drove back and forth in front of my gate and would yell obscene things at me. That was the only part that I found hysterical and still do. Those ignorant rednecks put on a show for me daily with that harassment. But the joke was on me however, because when it was all said and done, it was obvious that almost all of the 7-10 neighbors that helped spread rumors about me, harass me and destroy my vehicle and other despicable things, had all been awarded a monetary prize when I lost my divorce and was forced out of my house with 6 dogs, no money or friends, or a car, and nowhere to go.

** I would like to note, that Deputy Jason Anderson of the Brazoria County Sheriffs Department never came out to “check my property” in these desperate pleas for help. **

The following images are of the front gate to property and home that I once shared with Mike Phillips Jr. The gate was run down by my ex-husband Mike Phillips, in one of his typical 1998-2000 Toyota 4Runners,/that he frequently “flips quick” by rolling- back odometers/.

Then next, the broken down front door by way of his metal bat, and the destruction he caused once inside the house, knocking over my open paints in my workshop,and kicking and knocking down pictures and my furniture. He taped an eviction letter to the door before he left, and right after he threatened my life if I didn’t leave “his house”.

One week prior to this home invasion, I had lost everything in my divorce, in a Brazoria County Texas District Court. I was forced into a trial on the spot, without counsel, and in spite of my best efforts to prove my share of property in my marriage, the judgement awarded EVERYTHING to my spouse.

The 2nd home that was purchased dirt cheap in a tax sale in Brazoria County, then restored by myself and Mike Phillips during our marriage in Brazoria County, was later sold, by owner finance, to an Ex- Cop, turned refinery worker with 4 kids. Channing Hempsmyer and his brand new 3rd wife, her 4 kids, and with rotating his 4 kids out on the weekends.

They were living paycheck to paycheck, and was grateful every month when my husband Mike looked the other way when his mortgage payment was always a week or so late. It’s no coincidence that this EX-cop in Brazoria County named Channing Hempsmyer, would be conducting his own surveillance of my activity on Facebook, and then reporting his findings to Mike Phillips. Perhaps, a deal was made as cut on the balance of his mortgage that he could barely afford? “For sale by owner” , and Mike could make that call. Channing Hempsmyer, being an EX-cop in a small corrupt Texas town like Brazoria County Texas,

and while I was a frightened single woman all alone,

…so easily my gang stalking, illegal surveillance, and harassment flourished .

The following image is a list of household items that I listed for sale on Facebook. I was being forced out with 6 dogs, and I was desperate to raise enough money, to at the very least be able to rent a UHaul truck to pack up my stuff and dogs. I had no clue where we going, but I refused to abandon my dogs. My 6 dogs had been my only friends for that long terrible year after my Dad died, and throughout the nightmarish hell of being stalked in the woods, and dealing with my grief all alone. I believe I survived that tough time because of my dogs. My dogs and Jesus. They needed me. I had to get up and keep pushing to survive each day, for them, if not just for me. Jesus gave me the strength.

And here is the little Contract of Sale between Mike and Channing. My name and signature is not present on this contract. Mike went behind my back and paid a cheap 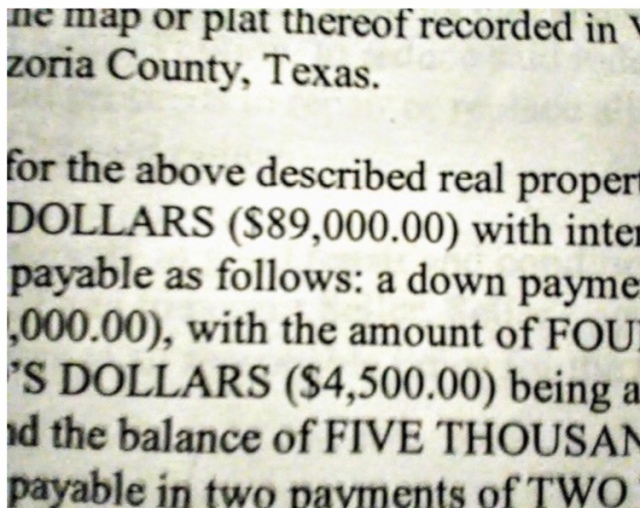 attorney in Sweeny, Texas to draw up this Contract of Sale, which states in the 2nd sentence, “not joined by his spouse” in this sale. Texas is a Just and Right Division State, so Real Property acquired during marriage is 50/50. by law. I worked very hard on that house sold to Channing Reysmyer, right along with my ex husband Mike. This Contract of Sale, done behind my back, in efforts to cut me out of anything I may have earned or lawfully entitled to, was Mikes never ending strategy to cheat me after I helped him profit, and his way of “keeping me in my place”.

A Brazoria County sheriff’s sergeant is free on $7,500 bail after being accused of inappropriately touching a 15-year-old girl

Deputy accused of touching women he pulled over during traffic stops

A former assistant prosecutor for the Brazoria County District Attorney’s Office was among more than 250 sex buyers and sex traffickers arrested during a recent Harris County prostitution sting.

Brazoria County Sheriff’s Office deputy has been charged with oppression and deadly conduct.

A Brazoria County Sheriff’s Office deputy lost his job after being charged with assaulting his wife, Sheriff Charles Wagner said.